The 1880 Coiled Hair Stella (Buy on eBay) represents the most desirable of the four different varieties produced, as well as one of the most desirable issues within all of United States coinage. It features the obverse design by George T. Morgan depicting Liberty facing left with coiled hair. The reverse design containing the five pointed star is the same used in common across all issues.

It has been estimated that approximately 15 examples of the coin were originally produced in gold, from which there are just 10 known survivors. Copper and aluminum strikings are also known to exist.

As the rarest and most desirable of all Gold Stellas, auction appearances are infrequent and generate considerable excitement with collectors. An example graded NGC PF 67 with a CAC verification sticker recently sold at auction in April 2015 for $1,821,250. The auction record for the issue is held by an example graded NGC PF 67 with the Cameo designation from the Tacasyl Collection of US Proof Gold Coins, which sold for a staggering $2,570,000 in September 2013.

While the previous year was struck in relatively large quantity to demonstrate the potential denomination, the 1880 Flowing Hair Stella (Buy on eBay) saw extremely limited production primarily for the purpose of sales to collectors. The obverse once again carried Charles Barber’s flowing hair design, with the same reverse dies used as the prior year strikings. Most of the surviving examples are in higher grades, indicating that they were carefully preserved after striking. This confirms the theory that these were solely produced for sale to collectors.

It has been estimated that around 25 examples of the issue were originally struck in gold, from which perhaps 20 survivors are known. Strikings were also produced in copper in aluminum in smaller numbers. Although this issue has similar rarity to the coiled hair variety of the same year, it consistently brings lower prices at auction due to lesser demand from collectors.

The record price for this issue was realized for a superlative example graded NGC PR 67 with the Star Designation, which realized $959,400. This example was sold as part of the Tacasyl Collection of US Proof Gold Coins auctioned by Bonham’s in September 2013. 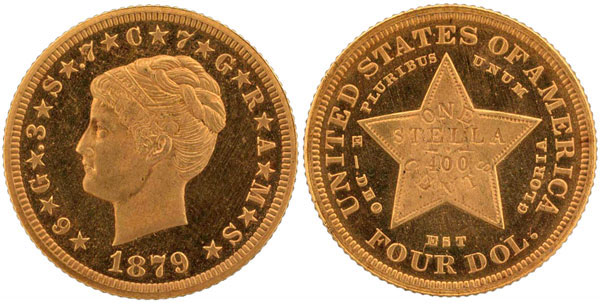 The 1879 Coiled Hair Stella (Buy on eBay) was produced in considerably smaller quantities than the flowing hair variety. The coiled hair variety was designed by George T. Morgan, with an image of Liberty on the obverse, facing left with her hair coiled atop her head. The reverse design features the five pointed star found on all other varieties.

The exact mintage of this variety is unknown, but it has been estimated that approximately 15 examples were struck in gold composition, from which there are approximately 12 survivors. A limited number of copper and aluminum strikings are also known.

This issue generates considerable attention on the rare occasions it is offered for public auction. An example graded PCGS PR65 with a CAC verification sticker was recently offered in April 2015. This example realized a final auction price of $881,250, establishing a new record high price. 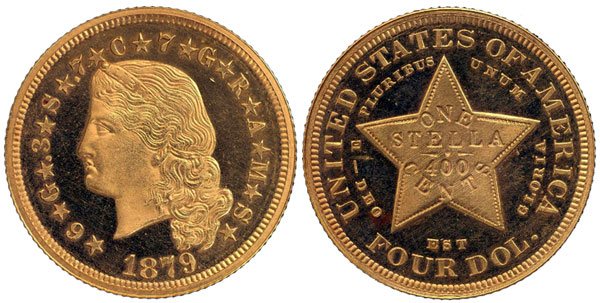 The 1879 Flowing Hair Stella (Buy on eBay) was the initial pattern produced for the proposed international trade coin. The obverse design featuring an image of Liberty with flowing hair was created by Charles Barber. This issue represents the most available and relatively affordable amongst the four different gold varieties.

Approximately 425 examples of the coin were originally struck for distribution to members of Congress in order to review the proposed coinage. Additional examples of the coin are believed to have also been struck at a later date and sold to collectors. In addition to the examples struck in gold, copper and aluminum pieces exist as well, both rare, and a unique white metal piece last auctioned in the early 1990s. 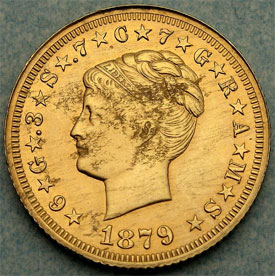 The Stella Gold Coins have a unique composition within United States coinage, which is indicated in abbreviated form within the obverse inscriptions. Each coin has a total weight of 7 grams, composed of 6 grams of gold, 0.3 grams of silver , and 0.7 grams of copper. This equates to 85.7% gold, 4.3% silver, and 10% copper. The coins carry a diameter of 22 millimeters and have a reeded edge. These specifications are the same regardless of year of issue or design type for Gold Stellas.

Since these pieces were specifically produced as patterns in proof format, the quality is generally good. One thing that should be mentioned is that the planchets were made from rolled gold stock. This results in lightly striated surfaces on many coins, called roller marks, which should not be confused with cleaning. Generally speaking, the less of these marks a coin has the higher it grades. Also thanks to these roller marks few of the known Stella’s are in gem condition. Additionally it is very difficult to find any of these pieces with full cameo or deep cameo on both sides. Pieces that do exhibit these features are much in demand, as are all of these historic patterns.